Like barrel bombs and helicopters, everything else is also untrue, on both sides. There’s their public angry face, their country club polite face, and their, “Let’s do business.” face.

Assad has been accused, by John Kerry and everybody else, of using chemical weapons against his citizens by way of helicopters to drop chemical-filled barrel bombs, and lacing artillery shells with toxins (like depleted uranium? – no, that’s a US thing – and don’t get me started on anthrax…)

Even Wikipedia is in on it:

From Wikipedia, the free encyclopedia

A barrel bomb is an improvised unguided bomb, sometimes described as a flying IED (improvised explosive device). They are typically made from a large barrel-shaped metal container that has been filled with high explosives, possibly shrapnel, oil or chemicals as well, and then dropped from a helicopter or airplane.[1] Due to the large amount of explosives (up 1,000 kilograms (2,200 lb)), their poor accuracy and indiscriminate use in populated civilian areas (including refugee camps), the resulting detonations have been devastating.[2][3][4] Critics have characterised them as weapons of terror and illegal under international conventions.[5]

“…indiscriminate use…” but by whom?

“Accordingly, we have taken unprecedented steps to declassify and make facts available to people who can judge for themselves.” -John Kerry

What does ‘declassify’ mean, in this context? Invent?

Official U.S. government report on the alleged use of chemical weapons by the Syrian government against rebels on Aug. 21.The document proposes a possible motive for the attack — a desperate effort to push back rebels from several areas in the capital’s densely packed eastern suburbs — and also suggests that the high civilian death toll surprised and panicked senior Syrian officials, who called off the attack and then tried to cover it up.

While unusually detailed, the assessment does not include photographs, recordings or other hard evidence to support its claims. Nor does it offer proof to back up the administration’s assertion that top-ranking Syrian officials — possibly including President Bashar al-Assad — were complicit in the attack.

“This assessment will certainly evolve as we obtain more information,” the report said.

The material, prepared by senior intelligence officials, was said to reflect the judgments of the CIA, National Security Agency and other intelligence agencies involved in gathering information on the Syrian conflict. Using understated phrasing typical of bureaucratic reports, it asserts with “high confidence” that the Assad government launched a chemical weapons attack, using what it said was “nerve agent,” a class of chemical munitions that includes sarin.

Oh, and about sarin gas, the [US] military variant is known as VX.

As it turns out, there was some truth in that report, and it was all backwards. The barrel bombs and the gas and all the WMDs are coming from the West-backed rebel side. Saddam got his chemicals from the US (ask Rumsfeld what Iraq was about covering up,) as did other allies in the region. Kerry didn’t really do anything about it either, apart from shaking his fist quite a bit.

[Next three photos are from a VT article; commentary is mine.]

These men are not Syrian government forces, they are US-backed rebels. They are not packing the bombs with explosives or the man on the left would not be smoking. 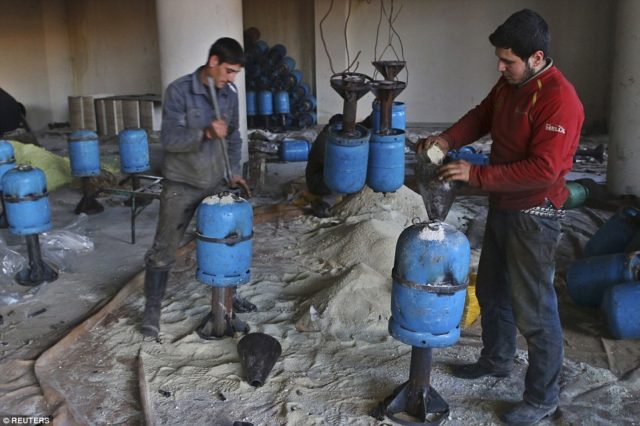 Hmm… but it can’t be the rebels. How do they drop those things if they don’t have helicopters?

All the newspapers said the same thing all along, “unguided barrel bombs” dropped from Assad’s helicopters (’cause he’s the only one who had helicopters.) Remember?

“Seems to be coming from the clubhouse.” With that golf cart in the background, there’s gotta’ be at least a couple of white guys around… maybe four. “Just look what those Assad bastards did to the practice green. War is hell!” 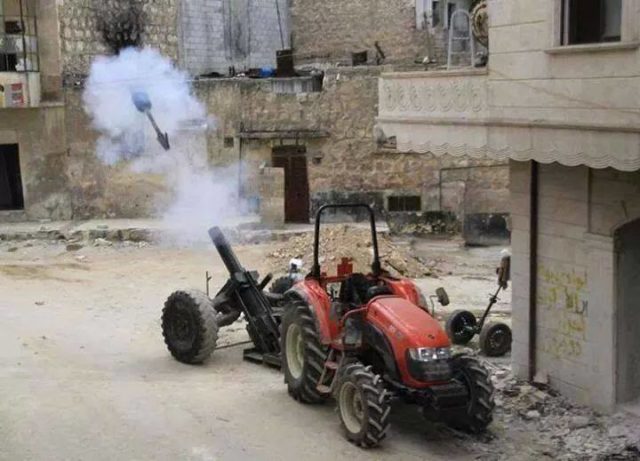 Fighting has intensified around Aleppo and its neighboring provinces since the government sealed off the final route into rebel-controlled neighborhoods of the city. The United Nations said the encirclement of rebel-held areas of deeply divided Aleppo traps nearly 300,000 residents, making it the largest besieged area in war-torn Syria.

The rebels have launched a counteroffensive, clashing with government forces on a number of fronts. They detonated at least one large tunnel bomb underneath a government position on the southern outskirts of Aleppo on Tuesday evening, in a renewed attempt to break the government’s siege on the city’s east.

Smoke in the sky; for defense or for targeting, or for an alibi? Were they setting tire fires around hospitals?

All these articles use many terms differently. They also suggest that west-backed rebels (USA’s ISIL, al Qaeda, al Nusra, etc.) are the real thugs in this failed regime change. Turkey’s, Georgia’s, Saudi’s, Israel’s, and America’s deep states are synced in Syria. Whether or not they succeed is up to Syria (and Russia.)

NEO – Don’t Cry For Me in Aleppo

Chemical weapons “red line” crossed in Syria – but not by Assad!

There are different levels of funding; ISIS, ISIL, Daesh, Al Nusra, Al Qaeda, (the special forces of the rebel world) look like they live pretty high on the hog. They must all benefit from the best funding. Note the plastic wrap still on the headrest, the faux wood dash, and even a disco ball hanging off the mirror… 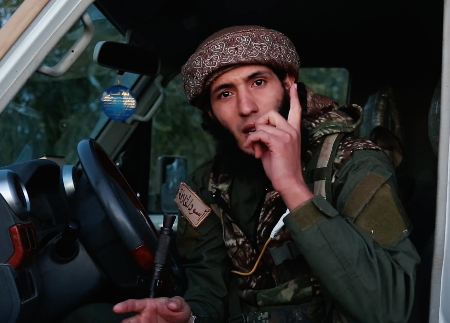 …and the lack of battle scars on any of their gear.

These images looks like the Neiman-Marcus catalogue for zealots. This is the propaganda of Jihad and its manipulation by the West …just as long as the rifles are Russian, everything is copacetic. The repeated “We’re Number 1” kinda’ tips the bit. [They may be pointing up.]

The financing cannot be denied, however, and most of the gear and ammo comes from Uncle Sam via Incerlik and Saud. The medical care comes from Israel, mainly.

The Brits know what’s going on, they’ve even helped, but, “Tight lips sink ships” and all that.

The innocent victims, on the other hand, are getting little to no support. Perhaps a magnanimous superbug will come along and end it quickly for them all.

American peace delegation goes to Syria on a fact-finding mission – UN. Must watch video for the truth about Syria: